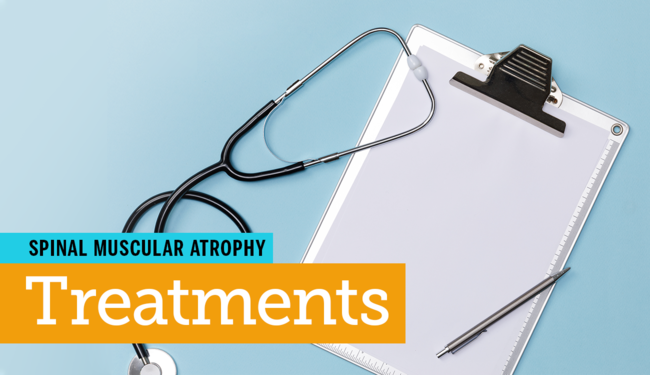 Until very recently, treatments for spinal muscular atrophy (SMA) could only manage symptoms. Existing therapies supported breathing, eating, and mobility functions as muscle weakness inevitably progressed. In the past few years, new treatment options to modify the course of the disease have become available for people with most types of SMA.

Depending on age, SMA type, and the severity of symptoms, people with SMA may require different types of treatment throughout their lives.

Spinraza, Zolgensma, and Evrysdi are types of genetic therapy. Zolgensma, which is indicated for infants under the age of 2, is administered as a one-time intravenous infusion. Zolgensma is believed to work by providing cells with a full copy of the survival motor neuron 1 (SMN1) gene. In people with SMA, the SMN1 gene underproduces SMN protein, which is critical to motor function.

Spinraza is given intrathecally — injected into the spinal canal through which the spinal cord passes—once every four months after the first few loading doses. Spinraza is believed to work by increasing the production of SMN protein by a similar “backup” gene, the SMN2 gene. Spinraza is approved for people of all ages with SMA due to mutation in SMN1.

Evrysdi is taken by mouth once daily at home. Evrysdi is believed to work by repairing the SMN2 gene, which in turn promotes production of SMN protein. Evrysdi is approved for anyone over the age of 2 months, including those with later onset SMA.

Side effects of both Spinraza and Zolgensma can include abnormal bleeding and vomiting. Zolgensma may cause serious liver injury in some people. Spinraza may cause kidney problems, constipation, headache, fever, and lower respiratory infections. Common side effects of Evrysdi include diarrhea, vomiting, and rash. Evrysdi may also cause side effects specific to those with infantile onset of SMA that include upper respiratory infections and pneumonia.

Ventilation assistance can significantly extend life in people with SMA who have breathing problems. There are many types of assisted ventilation systems.

A noninvasive ventilation system involves an airtight mask worn over the nose or nose and mouth. The mask is connected to a machine that delivers air under pressure. The air may or may not be enriched with oxygen.

One form of noninvasive ventilation is a bilevel positive airway pressure (BiPAP) machine, which someone with SMA may use for breathing support when sleeping or during sickness.

A sipper vent is a mouthpiece positioned like a microphone when used by someone sitting in a wheelchair. The sipper vent can make it easier to talk and breathe at the same time.

If a person needs invasive ventilation support for an extended period of time, their doctor may recommend creating a tracheostomy—a small, surgical hole in the throat—to place a breathing tube directly into the trachea. Many people with a tracheostomy can learn to eat, drink, and talk normally.

In cases where scoliosis (abnormal curvature of the spine) is compromising breathing and lung development, a vertical expandable prosthetic titanium rib (VEPTR) may be surgically implanted. The device attaches the ribs to either the spine or hips and helps straighten the spine and separate the ribs to create space. The VEPTR device is expandable as the child grows. A VEPTR is usually implanted before age 5.

Weak respiratory muscles can also make it difficult for people with SMA to cough and effectively clear mucus from the lungs. Many forms of respiratory therapy can help with this issue.

An insufflator-exsufflator device, such as the CoughAssist, provides pressure on the airway to produce a coughing effect. A high-frequency chest wall oscillation device such as the InCourage comes in the form of a vest that creates vibrations to help move mucus.

In some people with SMA, the muscles involved in chewing and swallowing become weak. When these muscles weaken, it becomes difficult to eat and increases the risk for aspiration (inhaling food particles into the lungs). It may become necessary to use a feeding tube system that bypasses the mouth and esophagus.

Liquid nutrition for tube feedings may be purchased commercially or made at home. People with feeding tubes may still eat by mouth for pleasure, if the risk of aspiration is not too great.

A speech-language pathologist (SLP) can help a person with SMA overcome problems with speech and swallowing that develop due to weakness in the tongue, throat, and respiratory muscles. An SLP may teach strategies for safer swallowing, conserving breath while speaking, or using adaptive language techniques if communication becomes difficult.

Physical therapy (PT) can help people with SMA maximize their function, strength, and endurance. After an evaluation to assess goals and needs, a physical therapist may focus on strengthening exercises, energy conservation techniques, fall prevention, or getting the best use out of mobility aids.

For people with severe SMA, PT can improve positioning, determine better bracing to prevent contractures (permanent shortening of a muscle or joint), and address range of motion. For children with SMA, PT can help them set and work toward goals of mobility and independence and delay the onset of complications.

Occupational therapy focuses on increasing independence in activities of daily living, whether in the home, at work, or in school. For example, an occupational therapist can suggest environmental modifications or recommend assistive devices that improve mobility.

Nearly all children with SMA develop scoliosis — a sideways curve of the spine. There are many different approaches to treating scoliosis. Some doctors recommend using braces to improve quality of life and delay scoliosis surgery.

Scoliosis is progressive in most cases and can lead to the development of problems with breathing and other functions. For these reasons, scoliosis surgery is generally recommended after age 10, or when children have finished growing.

There are several options for the correction of scoliosis. Surgeries include spinal fusion and the implantation of growing rods or a VEPTR device. Doctors may recommend a combination of these approaches to best address scoliosis.

Other Treatments for SMA

People with SMA may benefit from other forms of treatment, including certain diets, exercise, immunizations, and complementary and alternative treatments.

There is no specific diet that is recommended for everyone with SMA, nor is there evidence that any diet can help treat SMA. However, people with SMA may have some specific nutritional needs.

While fasting over many hours, our bodies break down muscle for glucose. Since muscle is lost in SMA, going for prolonged periods of time without food can pose a nutritional strain on the body.

For this reason, people with SMA may benefit from a diet high in protein and complex carbohydrates such as whole grains, lentils, and root vegetables. Some doctors recommend individuals with SMA take nutritional supplements such as creatinine or coenzyme Q10.

To limit long fasting periods, frequent smaller meals may be preferable to a few large meals. Difficulty chewing and swallowing are common symptoms of SMA. Changing the consistency of food can help make it easier to eat and lower the risk for aspiration.

It is crucial for babies and small children with SMA to get enough nutrients and calories for brain growth and development. A nutritionist familiar with SMA can help by creating a nutrition plan that adapts as the child’s nutritional needs change.

Older children and adults with SMA may need to control how many calories they take in, since a lack of effective exercise can lead to weight gain. Always talk to your doctor before making changes to diet — some special diets may be harmful for a person with SMA, and certain nutritional supplements may cause dangerous interactions with medications.

Physicians have differing opinions on the role of exercise for people with SMA. Most doctors recommend exercising as much as feels comfortable for optimal physical and psychological health. Exercise may help protect the joints from injury, preserve range of motion, and support healthy blood circulation.

However, some doctors worry that too much exercise may speed the progression of muscle loss in SMA. More research is needed to better understand how much exercise is beneficial in SMA.

People with SMA are particularly prone to respiratory infections. Medical experts recommended a flu vaccination each year to help avoid infection. Avoiding large gatherings where exposure to infection is likely may also be beneficial.

Natural or Alternative Treatments for SMA

It is highly unlikely that any natural or alternative treatment will effectively treat SMA. However, some complementary treatments may provide some relief from SMA symptoms such as fatigue, muscle pain, or joint contractures.

Most complementary or alternative treatments have not been investigated in scientific clinical trials to establish their safety and efficacy. Some people with SMA report feeling better after undergoing massage, acupuncture, or treatment by an osteopath or homeopath.

If you are thinking of trying an alternative treatment for SMA, make sure the practitioner has an understanding of how SMA affects the body. It may be best to discuss any natural treatments with your doctor in advance. Before trying any homeopathic products, check with your doctor to determine whether it could cause a dangerous interaction with prescribed medications.

I. Lay down flat and pray and meditate so far 60 mg codiene and baclofen 20mg is what takes edge offplus the injections every 2-3 months

Kelly Crumrin is a senior editor at MyHealthTeams and leads the creation of content that educates and empowers people with chronic illnesses. Learn more about her here.

A spinal muscular atrophy (SMA) diagnosis can be overwhelming, whether it’s for yourself, your...

A spinal muscular atrophy (SMA) diagnosis can be overwhelming, whether it’s for yourself, your...
read article >