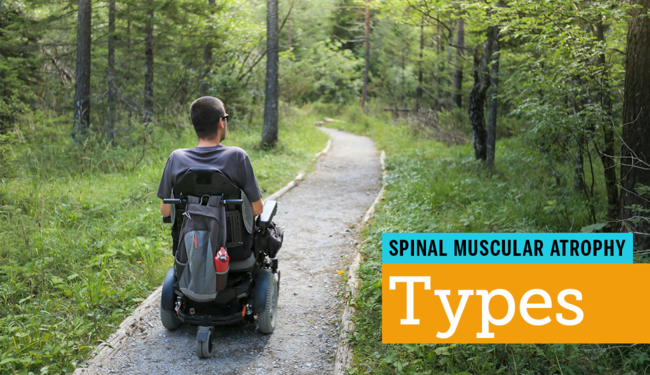 Spinal muscular atrophy types 0-4 account for as many as 95 percent of SMA cases. SMA types 0-4 are caused by a genetic mutation on both copies of the survival motor neuron 1 (SMN1) gene. The SMN1 gene mutation inhibits the production of survival motor neuron (SMN) proteins. SMN proteins are important for the function of motor neurons, nerve cells that allow the brain and spinal cord to send signals to the muscles. A second gene called the SMN2 gene produces a small amount of SMN protein, while the SMN1 gene is responsible for the vast majority of SMN protein production. Depending on the number of copies of SMN2 and the amount of SMN protein they produce, a person may have a more or less severe form of SMA.

Note that information about life expectancy and symptom progression is based on research completed before the recent advent of disease-modifying therapies for children with SMA. New treatments for SMA may redefine the course of the disease. Long-term follow-up studies will be able to provide insight into how prognosis and disease progression may change with the use of disease-modifying therapy.

Type 0 is among the rarest and most severe forms of SMA. Type 0 affects babies while still in the womb. Babies with SMA type 0 may only have one copy of the SMN2 gene.

At birth, babies with SMA type 0 have extremely weak muscle tone and may have deformities due to lack of movement. They may also be in breech position. Babies born with type 0 have weak respiratory systems which makes breathing very difficult. They may also have facial paralysis and minimal reaction to outside stimulation. Infants with type 0 will not achieve any motor milestones, such as lifting the head. The life expectancy for an infant with SMA type 0 is short. Infants born with type 0 often do not live past 6 months of age.

Type 1 accounts for approximately 45 percent of cases of SMA. Type 1 impacts babies and is usually diagnosed in the first 6 months of life. They may have one or two copies of the SMN2 gene. Babies with SMA type 1 have muscle weakness on both sides of the body, problems sucking and swallowing, and trouble breathing. They are prone to pneumonia.

Babies affected by SMA type 1 are sometimes described as “floppy” because of their lack of muscle tone. Babies with type 1 will not develop the ability to lift their heads or to sit up on their own. While their motor function development is impaired, their cognitive development is not affected. Many babies with type 1 are alert and are able to make facial expressions.

Life expectancy for infants with SMA type 1 may be linked to breathing ability. Many babies with type 1 do not live past age 2.

About 20 percent of SMA cases are type 2. Type 2 is diagnosed between the ages of 6 months and 2 years. Failure to meet motor skills milestones is often the first symptom of SMA type 2. Intellectual development is not impacted, and babies with type 2 usually respond to stimulation and engage with others.

Children with SMA type 2 lack reflexes and experience muscle weakness that usually is worse in the lower limbs. In almost all cases, children with SMA type 2 develop scoliosis (curvature of the spine), which can impact breathing. Individuals with type 2 are also prone to pneumonia and may have difficulty chewing and swallowing.

The expected life span for a child with SMA type 2 is about 25 years old, though many live longer with the right care and therapies.

SMA type 3 is a less severe form of SMA that develops slightly later in childhood or young adulthood. About 30 percent of SMA cases are type 3. Type 3 can be split into two groups based on age of onset. Type 3a includes children who develop symptoms between 18 months and 3 years old. Type 3b includes children and young adults who develop SMA between 3 and 30 years old. Children and adults with SMA type 3 may have three or four copies of the SMN2 gene.

Children and young adults with type 3 develop the ability to stand and walk. The first symptoms of type 3 may be falls, problems climbing stairs, and other types of muscle weakness. Muscle weakness occurs on both sides of the body and impacts the muscles closest to the center of the body and the legs the most. People with type 3 do not typically have breathing problems like those with SMA types 0-2. SMA type 3 has no impact on cognitive development.

Many people with type 3 are able to remain mobile, though they may have abnormal walking patterns (gait) and foot deformities. Some people with SMA type 3 may need to use a wheelchair or require support with daily tasks like dressing and using the bathroom. Life expectancy for people with type 3 is the same as the average life span of the general population.

Type 4 SMA is the mildest form of SMA and accounts for approximately 5 percent of SMA cases. Those with type 4 often have four or more SMN2 gene copies. People usually develop symptoms after age 35, though symptoms can develop as early as the late teens. Some of the first indications of SMA type 4 may include tremors in the hands, achy or heavy muscles, numbness, and cramping.

The life span for people with type 4 is similar to the general population. People with SMA type 4 are generally able to remain mobile into their 60s and beyond.

Other Types of Spinal Muscular Atrophy

The following spinal muscular atrophy types are rare and are associated with different genetic mutations than types 0-4. Like types 0-4, each type of SMA described below varies greatly in severity, impact on quality of life, and life expectancy.

Distal SMA is inherited from one parent instead of both. Distal SMA causes weakness in the hands and feet. The first symptom of distal SMA is often hand cramping in response to cold weather. Symptoms usually begin in adolescence, but they can begin in childhood or into a person’s 30s. People with distal SMA have a normal life expectancy.

Kennedy's disease, also called X-linked spinal and bulbar muscular atrophy, is an adult-onset form of SMA that affects men. The first symptoms usually appear between ages 20 and 40. A person may first notice hand tremors and muscle twitching. As Kennedy's disease progresses, people develop muscle weakness in their limbs which may limit mobility. They may also develop weakness in the face and tongue that causes speech and swallowing problems. Kennedy's disease usually progresses slowly, and people with the condition have a normal life span.

SMA with progressive myoclonic epilepsy (SMA-PME) causes seizures in addition to muscle degeneration. SMA-PME affects children in early childhood. Many children with SMA-PME develop normally in their first few years of life and then begin to show signs of muscle weakness in their lower limbs. Over time, muscle weakness will extend to other parts of the body and cause breathing problems. Seizures usually begin after muscle weakness develops. Children with SMA often do not live past late childhood or early adulthood.

SMA with lower extremity predominance (SMA-LED) leads to muscle weakness in the lower limbs, particularly the quadriceps (thigh muscles). This can lead to difficulty walking and deformities in the hips, knees, ankles, and feet. Symptoms of SMA-LED usually appear in infancy or early childhood, but about a quarter of people affected develop symptoms as adults. Like distal SMA, SMA-LED is inherited from one parent instead of both. People with SMA-LED have a normal life expectancy.

X-linked infantile SMA (XL-SMA) affects boys, usually from infancy. Baby boys with XL-SMA have significant muscle weakness, a lack of reflexes, and sometimes joint deformities. Babies may develop some motor skills, like sitting up, but lose them as the condition progresses. Muscle weakness in the chest can lead to severe breathing difficulties. Children with XL-SMA, which is similar to other SMA types that affect breathing, have a reduced life span. Many do not live past childhood.

Alison Channon has nearly a decade of experience writing about chronic health conditions, mental health, and women's health. Learn more about her here.

People with spinal muscular atrophy (SMA) sometimes face challenges with the clarity or volume of...