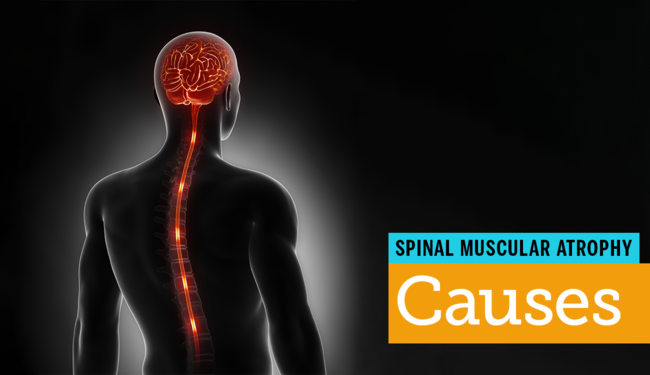 Spinal muscular atrophy (SMA) is a genetic neuromuscular disorder characterized by muscle weakness that worsens over time. Depending on type and age of onset, other symptoms of SMA can include respiratory difficulties, inability to stand or walk, and problems chewing and swallowing. Severe breathing problems are common in infant or child-onset SMA and can contribute to a reduced life expectancy. Adult-onset SMA generally does not influence life span.

SMA is an inherited genetic disorder. Spinal muscular atrophy types 0-4, which account for nearly all cases of SMA, are caused by a mutation in the survival motor neuron (SMN) genes on both copies of chromosome 5. (Note that most people have two copies of 23 chromosomes.) SMN genes tell the body to make SMN protein, which is crucial for the function of motor neurons. Motor neurons are nerve cells that transmit signals from the brain and spinal cord to the muscles. Without sufficient SMN protein, motor neurons die, and the brain cannot signal the muscles to function. The result is progressive muscle weakness that impacts functions ranging from walking to breathing.

There are two SMN genes on chromosome 5 — SMN1 and SMN2. In a person without spinal muscular atrophy, the SMN1 gene produces the majority of the SMN protein required for the muscles to function, while the SMN2 gene only produces a minor amount of SMN protein. People without SMA will possess two normal SMN1 copies and one or two SMN2 copies, though some people have several copies of the SMN2 gene and some have none.

Other spinal muscular atrophy types are caused by mutations on different genes:

How Does a Child Inherit SMA?

Nearly all cases of SMA are recessive — meaning a child must inherit a mutated gene from both parents to develop spinal muscular atrophy. For types 0-4, a child must inherit two mutated copies of the SMN1 gene. If both parents are carriers of the mutated gene that causes SMA, a child has a 25 percent chance of developing SMA and a 50 percent chance of being a carrier of SMA. If a person is a carrier, they can pass the gene on to their children, but will not develop SMA. In the United States, about 1 in 54 people is a carrier for SMA, though this rate varies by ethnic background. However, SMA is rare — it occurs in only 1 in 11,000 births in the U.S.

Genetic testing is used to diagnose spinal muscular atrophy in babies, children, and adults who exhibit symptoms of SMA. Genetic testing is also available during pregnancy to determine if a fetus has inherited mutated SMN1 genes. Prenatal testing for SMA is usually only recommended in cases where both parents are carriers.

Alison Channon has nearly a decade of experience writing about chronic health conditions, mental health, and women's health. Learn more about her here.
hug like (1) comment

Spinal muscular atrophy (SMA) is a genetic disease that destroys nerve cells in the spinal cord...

What Is Spinal Muscular Atrophy?Spinal muscular atrophy (SMA) is an inherited neuromuscular...

People with spinal muscular atrophy (SMA) may have a higher risk for developing certain other...

People with spinal muscular atrophy (SMA) may have a higher risk for developing certain other...
read article >

Spinal muscular atrophy (SMA) is a neuromuscular disorder defined by muscle weakness that...

People with spinal muscular atrophy (SMA) and their caregivers are encouraged to talk to their...

People with spinal muscular atrophy (SMA) and their caregivers are encouraged to talk to their...
read article >

Two Ways to Get Started with mySMAteam

Connect with others who are living with spinal muscular atrophy. Get members only access to emotional support, advice, treatment insights, and more.

Get the latest articles about spinal muscular atrophy sent to your inbox.

close
Overview Symptoms Treatments Types Causes Related Conditions Diagnosis
New to mySMAteam? Learn More
Quick Links
Q+A Treatments A-Z Resources Are you a provider? Crisis
About Us
What is mySMAteam? Partner with us Terms of service Press/News Privacy policy Cookie policy
Help With This Site
Getting started FAQ Community guidelines Contact us
© 2021 MyHealthTeams. All rights reserved.
mySMAteam is not a medical referral site and does not recommend or endorse any particular Provider or medical treatment.
No information on mySMAteam should be construed as medical and/or health advice.